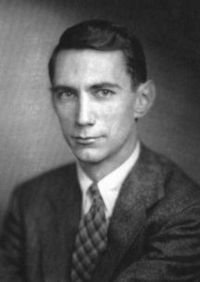 Claude Elwood Shannon- American mathematician, electronic engineer and father of information theory. Was born in Gaylord, Michigan on 30 April 1916. Died on 24 February 2001 in Medford. His work on technical and engineering problems within the communications industry, laying the groundwork for the computer industry and telecommunications. He applied Boolean algebra to electrical systems at the Massachusetts Institute of technology in 1940. Later he joined the staff of Bell Telephone Laboratories in 1942. When he working at Bell Laboratories, he formulated a theory explaining the communication of information and worked on the problem of most efficiently transmitting information.

Shannon was graduate of the University of Michigan in 1936. He awarded a degree in mathematics and electrical engineering. Later he went to Massachusetts Institute of Technology, where he studied electrical engineering and mathematics, receiving a master's degree and a doctorate. Shannon wrote a Master's thesis "A Symbolic Analysis of Relay and Switching Circuits"on the use of Boole's algebra to analyse and optimise relay switching circuits. His doctoral thesis was on population genetics.

Shannon joined AT&T Bell Telephones in New Jersey in 1941 as a research mathematician and remained at the Bell Laboratories until 1972. He worked on the problem of most efficiently transmitting information. Soon he discovered the similarity between boolean algebra and telephone switching circuits. By 1948, Shannon turned his efforts toward a fundamental understanding of the problem and had evolved a method of expressing information in quantitative form. The fundamental unit of information is a yes-no situation.

Shannon published "A Mathematical Theory of Communication" in the Bell System Technical Journal (1948). This paper founded the subject of information theory and he proposed a linear schematic model of a communications system. This was a new idea, that one could transmit pictures, words, sounds etc. by sending a stream of 1s and 0s down a wire.

Shannon received many honours for his work. For example: Alfred Nobel American Institute of American Engineers Award in 1940, the National Medal of Science in 1966, the Audio Engineering Society Gold Medal in 1985, and the Kyoto Prize in 1985. He also was awarded the Marconi Lifetime Achievement Award by the Guglielmo Marconi International Fellowship Foundation in 2000.

Shannon died at age 84 on February 27, 2001 in Medford, Massachusetts, after a long fight with Alzheimer's disease.