The Veblen effect is a phenomenon highlighted by the economist and sociologist Thorstein Veblen. A Veblen good is a type of luxury good for which demand increases as the price increases, in apparent contradiction to the law of demand.

Many years ago Leibenstein (1950) emphasized the significance of the signal effect the way people consume. This signifies that the utility of a product increases or decreases depending on whether it is purchased and consumed by other consumers. It can also depend on wheter the good has an high or low cost. In marketing, people used to buy luxury goods to impress. It is known that most consumer tacitly accept that luxury goods are bought for social signaling ambitions. For example, artwork, designer clothes, vintage and luxury cars, jewelry, etc [1]. 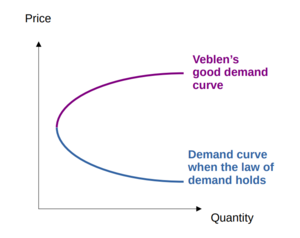 In addition of Veblen effect, there is only one type of goods that follows the reverse demand curve. Conforming to the classical view, the more expensive a product is, the less demand there is for it. In reality, this does not represent the lowest tier product. According to Giffen's paradox, a Giffen good is a good whose quantity demanded by the consumer increases when its price increases, all other things remaining equal. It is due to the fact that consumers have to consume this good because there is no viable substitute to it and the good is necessary to meet the basic needs of the user. An example is the rising price of bread in England in the late 19th century. Despite rising prices, demand was also rising, especially among the poorest households [3].

Similarities and differences between Giffen and Veblen

Let's take a look at the similarities and differences between Giffen and Veblen [4];

The Giffen effect concerns basic products. When their price rises, this causes a drop in the purchasing power of consumers, who therefore give up consuming more expensive stuffs in favour of basic stuffs despite the increase in price of the latter. Note that that Veblen goods are associated with luxury goods. With luxury goods and by definition the, Veblen goods, the importance is more in changes in other demand determinants, for example trends and social status.

All of the that is created by marketing and more especially; advertising. The social image implanted in a brand appellation is often the most important objective in a company's advertising strategy. This objective has gained more and more importance in contemporary times as technological and social forces amplifies the value of brand identity and its power over end users [6].

The objective of all that is to create a Veblen effect. In other words, nowadays, advertising is used to bring desire in the user to belong to a certain group of people that associated with a certain product. This is conspicuous consumption [7].