Executed consideration is a performed, or executed, act in return for a promise. Therefore, in reward cases, for example, a promise to pay a reward when an act is done becomes enforceable only when that act is performed[1].

Executed consideration, that is, where one party has received a benefit for which he must pay, it is plain that implied contracts are wholly aside from the purpose and intent, as well as without the language of the enactment[2].

If, for example, A offers a reward for the return of lost property, his promise becomes biding when B performs the act of returning A's property to him. The claimant's act in Carlill's case in response to the smoke ball company's promise of reward was thus executed consideration[3]. 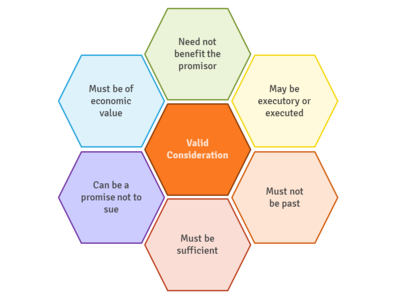 Consideration can be divided into the following three categories[4][5]:

Example: Omar promises to do some work in return for a promise of payment; shopkeeper's promise to supply the goods and customer's promise to accept the goods and pay. In the above examples, neither party has yet done any act but each party has given a promise in order to obtain the promise of the other person. It would be a breach of contract if either party withdraw from his/her promise without the consent of the other

Example:Richard loses his wallet and offers Bogdan a reward if he finds and returns the lost wallet. It is only when Bogdan finds the wallet and duly returns it to Richard that the reward becomes enforceable and the consideration becomes valid.

Example:Robert mows Mike's lawn and a week later Mike gives a cheque for $10. Robert's work is valid consideration in exchange for the cheque.

As well as being either executed or executory, there are additional rules that must be met for consideration to be valid[6]: