The International Monetary Fund is a nearly global economic organization. It's goals, as it claims, are fostering global growth and economic stability by providing policy advice and financing to its members in financial troubles, working with developing countries by helping them in achieving macroeconomic stability and reducing poverty.

The IMF's framework was established in 1944 at Bretton Woods Conference, and it came into formal existence in December 1945, when its 29 member countries signed its "Articles of Agreement". IMF headquarters are in Washington D. C. in the United States. IMF has 186 member countries (the newest member is Kosovo, since June 2009).

After the period of Great Depression in 1930's, countries started to protect their internal markets by raising barriers to foreign trade (establishing tariffs) or evaluating their currencies. Then, after the Second World War, most developed countries (mainly United States and United Kingdom) decided to establish rules of international economic cooperation in field of exchange rates, monetary system and eliminating exchange restrictions. Member countries agreed to keep their exchange rates pegged at certain rate to dollar (except United States: dollar was defined as certain amount of gold).

The exchange rates could only be change in case of "fundamental disequilibrium" in balance of payments and only with the IMF's agreement. This monetary system was called "par value system" (also "Bretton Woods System"). System has worked to 1971, when United States suspended convertibility of the dollar (and dollar reserves kept by other governments) into gold.

System broke down because dollar was overvalued because of huge American domestic spending - on President Johnson's "Great Society" programs and on Vietnam War. 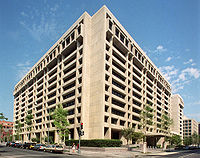 After the collapse of Soviet Union, IMF provided lending and advise for those transitioning economies. Then also was engaged in financial assistance (for example) during Asian financial crisis in 1997 and in Argentina in 2002. Since 1990's, IMF with World Bank worked on tools to alleviate debt burdens for poorest countries. They prepared "Initiative for Heavily Indebted Poor Countries" launched in 1996. In 2005, the HIPC Initiative was supplemented by the "Multilateral Debt Relief Initiative" (MDRI).

International Monetary Fund has 186 member countries. Every member have to pay it's part to Fund, called quota. The quota is mainly based on size of each economy and decide about amount of votes and amount of financing that country can get from IMF. Each IMF member has 250 basic votes plus one additional vote for each SDR 100,000 of quota. Accordingly, the United States has 371,743 votes (16,77% of the total), and Palau has 281 votes (0.01% of the total (1). Quota in 25% have to be paid in SDRs or widely accepted currencies and rest in country's own currency.

The SDR is an international reserve asset, created by the IMF in 1969 to supplement its member countries' official reserves. Its value is based on a basket of four key international currencies, and SDRs can be exchanged for freely usable currencies. With a general SDR allocation that took effect on August 28 and a special allocation on September 9, 2009, the amount of SDRs increased from SDR 21.4 billion to SDR 204.1 billion (currently equivalent to about $324 billion (3).

Three main tools that International Monetary Fund uses are: surveilliane, technical assistant and training, and lending. IMF usually once a year appraises each ecocnomy whether it has macroeconomic stability or it naads some adjustments in economic or financial policies. In 2007 IMF adopted decision about "bilateral survelliance". The IMF also works with the World Bank "to promote stable financial systems around the world" through the joint Financial Sector Assessment Program (FSAP). FSAP was introduced in 1999 after the Asian financial crisis.

In case of country's difficulties with financing it's balance of payments, IMF also offer a funds to "facilitate recovery". National authorities have to prepare a policy program with close cooperation with the IMF. Next stages of financial support are conditional on the effective implementation of this program.