The control chart is the basic and oldest tool for statistical process control. The creator of control charts is Walter A. Shewhart, who presented them in his book in 1924. Control charts are graphical method for monitoring, in which the main role is played by properly organized panoramic diagram. This diagram minimizes the number of required numerical operations, while following the course of the controlled process. Control charts are used to control variability and its causes. They are in the form of sheets that are so designed that operator can easily indicate changes of analysed parameter.

Every company strives to manufacture its products profitable. For this purpose, it must control the processes so as to meet all the requirements. It does so precisely using control charts. Using it employees can easily tell whether the change observed at any given time is a random event or is caused by errors of staff, machines or managers. If the latter, the next step is to find and eliminate the real cause of problem in process. Such a signal is presented in a control card in the form of:

In summary control charts are aimed at checking whether the process takes place as planned. However, in the long run they help to assess the stability of the process.

The \(\bar x r\) chart was the first widely used control chart. It is based on average value (the center line) and range. The mathematics is easier, but the results are less precise. Therefore, it should be used on samples lower than 10-\(\bar x\).

The \(\bar x s\) chart is based on standard deviation, which gives more precise results than in case of range. Range takes into account only the lowest and highest values, while standard deviation takes all. It should be preferred chart for normal usage.

Type of control chart to monitor count-type data, e.g. total number of nonconformities. It requires a fixed sample size. It is possible to track defects by type or using other category.

Type of control chart to monitor count-type data, like C chart. But in this case, the number of units may vary. Sometimes it is convenient to increase sample size if the number of defects is low.

Other types of charts

Control charts are created at specified intervals of the manufacturing process, using the predetermined number of samples. Information is coded in sheets, which allow to check whether the process is stable. On horizontal axis samples are marked, while on the vertical - the value of the observed variable. When creating control charts following steps apply:

Nowadays there are a lot of types of control charts, however it is convenient to begin with simple ones: R and S chart. The R chart is based on average and range, while S chart on average and standard deviation. In 1924, when the chart was created, counting standard deviation was very time consuming, therefore R chart was popular. Today we rather use S chart because of greater accuracy. The other criterion is sample size. If the sample size is smaller than 10-\(\bar x\) you should use R chart, otherwise S chart. 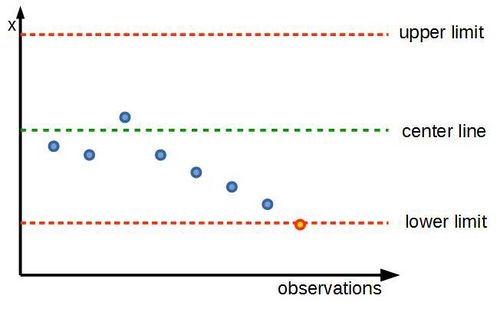 Let's assume that x is a variable we analyse using control chart. Then

Designation of the center line

On the chart center line and limits were drawn. Next quality inspector draws observations (blue points). In this example after several items, something went wrong and variable x crossed lower control line. That is clear signal of problems.

There are several rules of interpretation of control charts: