Pareto chart is a tool that enables managers to find the most important causes of the problems. It is based on probability distribution that describes many phenomena in production, sociology, finance and other areas. See examples below.

The principle, on which chart is based was invented by marquis Vilfredo Federico Damaso Pareto, Italian engineer, economist and sociologist (at that time scientist in fact - distinction of disciplines came later).

The chart is sometimes named Pareto-Lorenz diagram. Max O. Lorenz was an American economist who developed Lorenz curve representing inequality of the wealth distribution. The curve was an example of 80-20 principle.

The chart modern look of the chart was proposed by Joseph M. Juran. The abscissa axis presents causes ordered by the number of occurrence, and the vertical axes: frequency (or cost) and cumulative percentage. The frequency of causes is shown as bars, and cumulative frequency as curve.

The Pareto chart is one of 7 quality tools together with: Fish diagram, Check sheet, Control charts, Histogram, Scatter diagram and Stratification.

The Pareto principle allows to find 20% of the causes generating 80% of the effects. It shows that the incidence of most types of events can be observed in only a small portion of possible circumstances. This is true in many areas, e.g.:

Simplifying - a small number of people or the causes is responsible for the majority occurring phenomena. The abolition of the 20% of negative causes significantly improves the final result, a process, a situation. At the same time their identification allows to avoid the causes of minor importance, because Pareto principle is based on the analysis of the unequal distribution of decision-making factors.

The pareto analysis is a technique of using 80-20 principle to make the decision. The Pareto analysis is suitable to organize and analyse previously collected data. It is used when our goal is to prevent:

The decisions made in Pareto analysis are based on the items being analysed. Let's consider two examples: 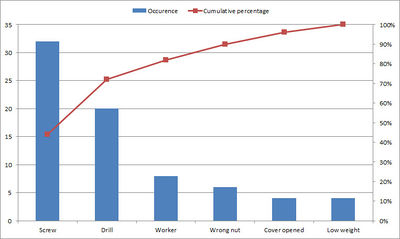 Pareto chart is a tool for the prioritization of the factors affecting the phenomenon studied. It is a graphical representation showing both relative and absolute distribution of types of errors, problems or their causes.

Description of the chart:

How to make Pareto diagram

Creation of a Pareto diagram requires:

The chart should be created as follows: