Fiduciary money is a type of currency that does not have coverage in material properties (to which we can include noble gold, among them gold, among others). The value of fiat money has its source mostly in the legally-decreed monopoly of state power. This allows the use of this currency as a legal tender in a given region. The functioning of fiat money is based on trust (Latin fides - faith). In other words, it is a medium of exchange that is not a commodity of any commercial value, nor belongs to production or consumption goods.

There is a widespread belief that the definition of fiat money is the same as the concept of paper money (banknote), unlike in the case of ore coins. However, due to the fact that money based on ores can be represented by paper banknotes (certificates giving the right to collect ore from the treasury), while fiat money can be distributed in the form of precious metal coins minted, this conviction is not correct.

Currently, fiat money is issued as part of monetary policy conducted by central banks. The key instruments regulating the amount of money in circulation include the interest rate on loans granted by central banks. Its amount is subject to changes, which is aimed at ensuring the stability of the market economy.

The evolution of the form of money 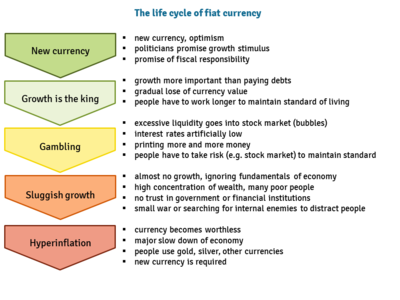 The evolution of the form in which contemporary money can occur is undoubtedly influenced by the payment system that has developed over time. The initiation of money is related to the monetization of precious metals. At that time, the primary means of payment were precious metals, for example gold, silver or copper. Subsequently, paper assets such as banknotes and checks entered the payment system. The disclosure of defects associated with money in the form of coins and banknotes, and therefore frequent cases of theft or difficulty in transporting very large amounts of heavy metal coins and rapid development of banking, have enabled the introduction of a payment system based on checks. Checks allowed to carry out cash transactions without the need to physically carry large amounts of money. In addition, the introduction of checks led to the reduction of transport costs related to the functioning of the payment system and contributed to the improvement of the efficiency of the economy. The next step possible to implement thanks to the development of advanced telecommunications technology and computers was the emergence of electronic means of payment. The advent of electronic money constituted the global evolution of payment systems. Such money can occur, among others in the form of debit cards, stored-value cards, electronic cash or electronic checks.

The Austrian economist Ludwig von Mises devoted much attention to the issue of fiat money. The money typology according to Mises is based on the division of money in a broad sense into money in the narrow sense and on money sybstytuty, to which the Austrian scholar included fiduciary media.

Ludwig von Mises distinguished the following types of money in a narrow sense:

Ludwig von Mises also distinguished money substitutes. Unlike credit money, the value of which depends on the credibility of a given person, substitutes are paid on demand and fully secured claims to money (raw material). They can take the form of a vista or banknote deposit. Money substitutes are divided into cash certificates and fiduciary media.

Fiduciary media, on the other hand, are divided into uncovered deposits and banknotes as well as short money in this respect, in which their value exceeds the value of the metal from which they were made.

According to the Austrian economist, changes in the amount of monetary certificates do not change the money supply. In turn, the issuance of fiat money results in the fact that the bank's loan funds outweigh its own funds and those entrusted by clients. In this process, von Mises sees the reasons for credit expansion.