Term emission of money (or money creation means introducing to circulation in economy cash- or non-cash money. It is mainly function of central banks in every country, but commercial banks also can indirectly create money.

Central bank emits bank notes and coins as well. The acceptance of notes as a lawful way of payments, which makes it possible to regulate the obligations (debts), can't be questioned, but there is a limiting sum, above which it is possible to refuse to regulate charges in coins.

Emission of money in closed economy

In the past, central banks introduced to the circulation bank notes (printed, created money) throughout the purchase of noble metals (gold or silver - in stable parity) or by giving credit to commercial banks and government. Therefore, the total nominal value of cash consisted of the cash in circulation in figure of debts in central bank and the accumulated ores in treasure. Interests from debt were/are introduced to circulation again. 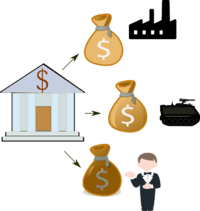 In the times of an increasing meaning of the international trade a new possibility for the emission of money appeared. Thanks to honouring the legal local means of payment by the central banks of particular countries, they gained the possibility of an enlargement of the quantity of cash in a way similar to the purchase of ores. Above of all, this possibility influenced particularly positively on importers and did not harm exporters.

However, the development of the international exchange lead to some kind of non-balanced situation, because some countries began to accumulate the foreign currencies, they sold more goods abroad than they bought, the reserves of foreign currencies were growing. And this situation could finish with an impact in a country in which the reserves would grow to such sizes that their exchange on ores could lead to a loss of fluency.

In relationship with above, this situation could create a short-time advantages for importers. But this benefits could become serious problems when transaction would be accounted in ores. It does not change the fact that an emission of a larger quantity of money in form of debt became possible, and developed countries cope with this problem throughout a change of the parity of exchange currencies.

After the fall of the Bretton Woods system the only way of enlargement of the monetary base became the debts of remaining subjects in Central Bank.

Commercial banks have the possibility of emission of money mainly by giving credits to their customers. Therefore, enlarging debts in banks give a possibility to enlarge nominal value of non-cash money in circulation. The repayment of capital instalments means durable money recall. Interests are treated as the income and they come back to circulation as the expenses.

The possible threats connected with emission of debt money

The lack of connections between the real demand on money and the total nominal value of money which is in circulation cause the problems of nature inflationary and deflationary.

In the beginning, intensive credit action enlarges incomes, and in consequence the credit ability as well. However, in a certain point it is not possible any more to increase production, which can cause inflation, and if the creation of money does not satisfy the needs of real economy, we can have recession.

Obviously in the worst situation are those who are the most involved in debts, but a smaller and smaller supply of money in result of paying off the debts (the decrease of credit ability of system) hits in next branches of economy (in smaller or larger degree involved in debts and related one to another).

Alternative solutions to emission of money

The question of optimum quantity of money in literature appears in economy very often. In according with one of the ideas, the total nominal value of money in circulation should equal the total value of accessible goods on market. The systems described above do not guarantee this in average and long period. Alternative studies do not guarantee this either, but they deliver some pieces of advice. Here are some examples of alternative money theories: