Graphical Evaluation and Review Technique (GERT) is one of the network charts. The method was created in early sixties and first described by Alan B. Pritsker in 1966. His publication remains the most popular and accessible description of GERT (see references for link). The main application of the method are poorly defined, highly probabilistic R&D projects, where there can be many alternative paths and loops.

GERT vs. other network diagrams

Its much less popular than PERT (Program Evaluation and Review Technique) or CPM (Critical Path Method). However it has can offer much more than those methods. PERT or CPM are very popular in most projects, but they have their limitations. The main are:

GERT doesn't have those limitations. But it comes at a cost of more sophisticated diagram.

GERT uses activity-on-arrow notation only. That means that each activity is described on arrow. The nodes are used to connect activities, but also to determine type and conditions of relations between them.

Each task has two parameters: duration and probability of appearance.

There are three logical operators in GERT which concern activities incoming to the node:

The most common is AND, which means that every incoming activity has to happen before the outcoming one start.

There are also two types of relations that concern activities outcoming from the node:

Each node consists of one logical operator and one relation, which gives six combinations: 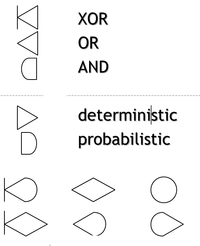 In this example two space vehicles are being sent and meet in the space. The success of the mission is possible only if both are successfully launched. 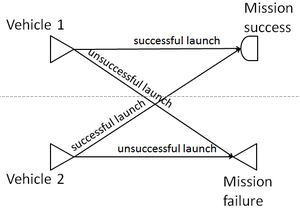 The example below shows simple loop. The activity can be performed for the first time or (XOR) for the next time. Thus XOR in the beginning. If the result of the activity is not acceptable, the activity is repeated. The probability of repeating can be calculated.

Calculation of duration requires analysis of probability and duration. 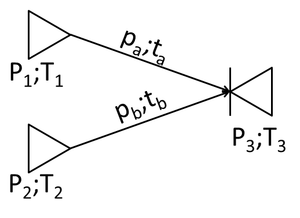 The equations below show how to calculate probability and duration of arriving at node 3 from nodes 1 and 2, which are alternative.