Michael E. Porter on the basis of observation of the competitive environment of enterprises put forward the idea that some firms in the same sector, are similar to each other, because of the chosen development strategy. Porter called these similar companies: strategic groups.

They are subsets of the sector, which consists of companies that have pursued a similar approach to the competitive struggle, offering comparable products (with similar quality and price), brought to the same customer segment, resulting in similar marketing policy, characterized by the same distribution network. 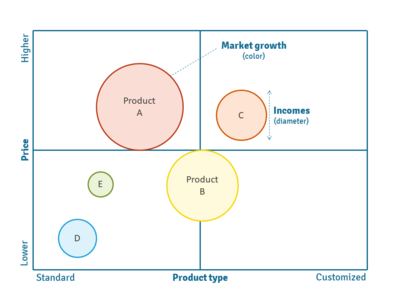 The performance of a specific company, is estimated comparing it to the average for its industry or to the average for the entire strategic group for which the organization belongs. The concept of strategic groups rejects the theory that competition in the market is to compete with each company in each particular sector, but assumes that it takes place only between companies of the particular group. The analysis of strategic groups allows to understand and anticipate the forms of competitive fighting and areas of concentration of competition.

Rivals from different groups often come together wanting to strengthen barriers to entry into the sector, in order to impede imitation strategy used by potential new competitors, and to use the common market, allowing them to achieve benefits in the long run.

In sectors where companies are trying to restrict competition through differentiation strategies, the differences between the groups are the biggest.

Its worth noticing that barriers to entry into the sector strategic group and exit from it are called intra-industry mobility barriers, and their analysis provides an answer to the question why companies are finding it hard moving from one group to another.