Conditions of decision-making are main factors influencing managers during decision process. There are three general conditions: certainty, risk and uncertainty. Manager, preparing a decision, must take into account: type of decision and specific conditions which may occur in business environment. Turbulence and the unpredictability of economic life, makes uncertainty most common condition of decision making.

Conditions of certainty in decision making

A condition under which taking a decision involves reasonable degree of certainty about its result, what are the opportunities and what conditions accompany this decision.

It boils down to the fact that the manager sees all the possibilities and risks of possible alternatives, which in the simplest example, there are two. Unfortunately there is little organizational decision be taken in conditions of genuine certainty. Cyclic decisions bear a certain degree of certainty, but if the recurrence is upset (for example through the bankruptcy of one of the suppliers) the decision-making process must be carried out with a certain amount of risk, and this is due, first of all, a wide range of possibilities, secondly, ignorance of the other actors, secondly a continuous volatility and unpredictability of market changes.

Making decision under the conditions of risk 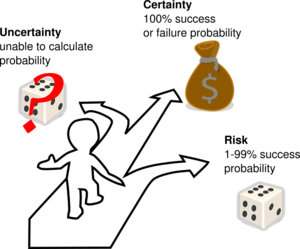 A condition in which the availability of the various opportunities and associated with each of them the potential benefits and costs are known with some estimated probability.

Important here is the ability to predict by the manager, the potential results of the actions. Managers should skilfully use own individual qualities such as intuition, and capitalize on the experience of the past. Risk condition is accompanied by the average level of confusion and moderate risk of taking the wrong decision. Scientists link this type of condition with gambling. In management, risky decision is being made knowing the opponent cards, at least in a substantial part of it. On the other hand, it is not known what effects can bring decision preferring either party.

Conditions of uncertainty in decision-making

A condition in which decision maker does not know all the choices, as well as risks associated with each of them and possible consequences.

In this condition most of today's serious decision are being made. The dynamics of economic life determines the managers to decide without knowing all alternatives, as well as knowledge of the risks associated with the known alternatives. Such situation is associated with a very high probability of erroneous decision, which could trigger a counterproductive effects. First of all, in order to reduce the risk: managers should collect as much relevant information, and then try to make rational and logical choice. Intuition, correct judgement and experience are in such conditions, the priority, although you should not forget about other methods that may help to decide.