A decision tree is a graphical way to support the decision-making process. The tree is used in decision theory, and has a lot of uses. It can help in solving the decision problem, and creating a plan. Decision trees are useful in problems with many decision variants and in situation of high risk. Decision trees are used in fields such as botany and medicine. Increasingly, they are used also in economics, as they are able to facilitate and streamline computer-aided decision-making process.

The starting point is a collection that contains all the analyzed objects; in the course of the analysis it is split into a number of subsets. Next each of the subsets is further divided; at the end of the analysis each object is a separate class. 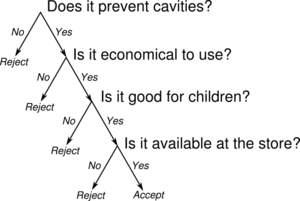 A decision tree is consists of a root, nodes, and leaves. Leaves are nodes that do not have edges. The root of the tree is created by the selected attribute, while the individual branches represent the value of this attribute. Thanks to the decision tree, created on the basis of empirical data, you can classify new objects that were not available in time of creating the tree.

Decision trees are characterized by a hierarchical structure. During following steps set of objects is divided into smaller sets on basis of values of the selected features or a combination of them. The final decision depends on the answers to all questions. In the tree construction algorithms, one of the key elements is the choice of sequence of features, according to which, on various stages, set of objects will be divided. Decision trees is a complement to the classical decision making methods. An example might be discriminant analysis. Decision tree hierarchy is a feature that stands out from the other decision making methods.

The general rules of decision tree design are: