Mass production is the manufacture of large quantities of items based on the division of labour, high specialization and continuity (as opposed to make to order production). Product, in the course of the manufacturing process is constantly on the move, subjected to treatment or transported between manufacturing workstations. Workstation at all times perform work involving specific steps in production process. After the transfer of the item to the next workstation, next item should be taken into processing to preserve continuity of the work. Workstation are placed sequentially next to each other, so that the time allocated for the transfer of production items between them are minimal. Mass production is also characterized by a high repeatability of the manufacturing process.

The main advantage of mass production is lower cost of production of one unit. This is due to the specialization of the work which also brings better quality of produced goods. Therefore, in the long run company can produce more products of better quality for a given sum of expenditures, which in turn decreases the cost of a single item produced. 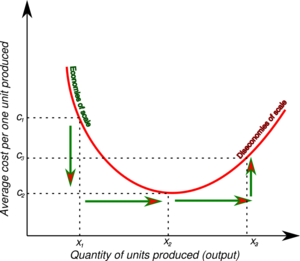 Another advantage is the fact that the reproducibility of the work contributes to the achievement of better results. Continuously performing of the same tasks contribute to the improvement of the production processes and whole production system.

Main disadvantages are narrow range of assortment of manufactured products. Goods produced in mass production system are characterized by very high similarity, because they come from the same production batch. This can cause low competitiveness of the company on the market.

Another disadvantage is the small flexibility of production. Highly specialized production line set for one type of item, must be substantially revamped in order to produce a different product, which increases unit cost of processing new product.