Andon is a visual system that notifies managers and workers of a problem with production process. It can be in form of large board with light signals or, more recently, large LCD screen showing information about quality problems. The andon system is linked with equipment that is able to detect problems or even stop the production. The famous equipment is Toyota andon cord. Every worker could pull the cord and stop the production. Nowadays, it is more common to use buttons.

Also the machines can have automatic detectors. That solution is called Jidoka and was developed by Toyota in early XX century as one of the first elements of Toyota production system.

In case of any problem related to process, following procedures apply. 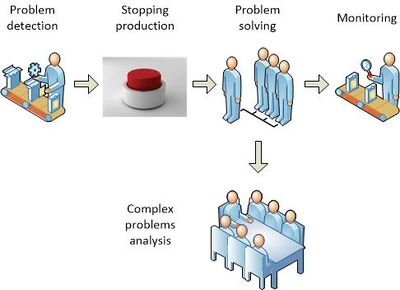 The method is not intended to solve sophisticated problems. It's purpose is to make high quality production possible again. Any more complex problems have to be solved separately. 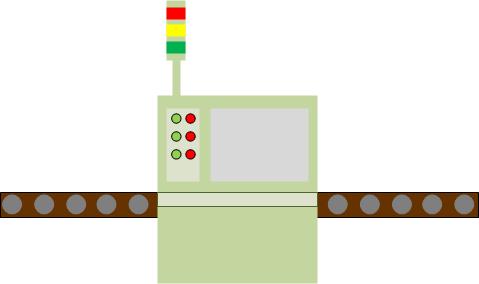 Originally signal lights were installed on the machines. However, when the production lines were implemented, it was not convenient. Therefore, the andon cord idea was developed. But the signal should be passed somehow to all interested people. The large board with signal lights was usually installed in a place visible for everyone on the production floor. When the computer and intranet era came, those board were replaced by information systems. Now every interested employee and manager can see immediate alert on his computer or smartphone.