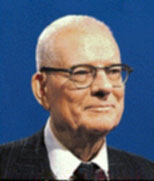 William Edwards Deming (October 14, 1900 - December 20, 1993) was one of the world's famous American Total Quality Management gurus since 1940's. He was born in Sioux City, Iowa, USA. He studied on university of Wyoming, Colorado and Yale. After studies he worked with Walter A. Shewhart in Bell Laboratories. During the World War II, he was related with military industry. After the war, he went to Japan in 1950's to help reconstruct Japanese industry. During that time he developed a theory in which he stated that: higher quality can mean lower costs. When he returned to USA, he founded a consulting company.

Japanese approach to quality management was discovered by western enterprises only in early 80-ties, after an interview with Deming in NBC. This is viewed as beginning of new quality movement in USA and Europe.

To appreciate impact of Deming on Japanese industry, his name was given to the first quality award. Deming Prize was established in Japan in 1951[1].

William Edwards Deming is known for his work in the field of quality management, specifically his 14 points for management and his focus on continuous improvement. He is also known for his work in the field of statistics and his application of statistical methods to quality control. Deming's ideas and methods have been influential in the manufacturing and service industries, and have been credited with helping to improve the quality of products and services in the United States and Japan. He also received the Presidential Medal of Freedom in 1985.

The main Deming's achievements are: