Process of the consumer decision-making involves a series of behaviour of households in the market and taking action to meet its needs with limited resources. The purpose of the household is to maximize the utility gained from consumption of the goods given its particular incomes and prices of goods and services. Maximizing the utility requires they take concrete decisions mainly:

The consumer seeks to maximize the utility of goods consumed, but it must take into account various limitations. They are: limited income and the price on which the consumer has no direct effect. Usability is a subjective category, depends on feeling of a particular consumer. One good for one may be of great utility and for other may not have it at all. When choosing between two goods, the consumer will select the combination of consumption, which will give him the greatest overall utility.

Choosing the time spent on work and leisure

Income of households originate mainly from the sale of the work. The consumer must choose between leisure (free time, which has its usefulness) and the work that generates income.

Decisions on the allocation of income between consumption and savings 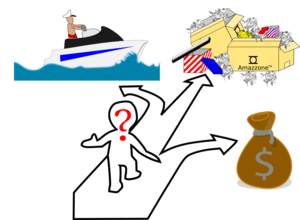 Consumer must decide which portion of income he should immediately spend, and which save for future consumption. This choice also has its limitations, which are the amount of income and the interest rate. They create a specific budget constraint, also called market opportunities.

Change in the interest rate will change the consumer's decision. Higher interest rate lower current consumption level, at the same time causing an increase in savings. So there is a positive correlation between savings and changes in interest rate

Consumer behavior are a process involving: acquisition of goods, its use, and disposal of it. These include not only physical actions, but also all the operations taking place in the psyche at the time of purchase. Consumer behaviour show the procedure used to satisfy the desires of individuals. Thus, they are represented as a series of systematic response to various stimuli.

Consumer decision making behavior include all activities, both mental and physical related to the acquisition, use and consumption, as well as own production (in the household), which allow the consumer achieve the objectives and thereby lead to satisfaction of needs.

Consumer on the market is everyone from small child calling for buying some toys during shopping and CEO of a large company ordering needed equipment worth millions. Similarly discrepancy is present with the products (goods consumed), which can be everything that can satisfy and fulfill desires of consumers.

There are two main types of consumer behavior on the market:

Both types of consumer behavior can be further classified into:

Both voluntary and involuntary behavior can be further separated into:

Consumer decision making behaviour during purchase can be classified by four factors. There are the following determinants of consumer behaviour: