Management by conflict is a way of influencing the workers by various means, designed to counteract the effects of low activity, lack of commitment and low motivation. This management style stimulate internal initiative, action and development of creative problem-solving competences. Mary Parker Follett argued that the conflicts within the organization are quite normal and even thought that through them, managers could generate a valuable difference between parties of conflict, which lead to innovation.

Assumptions of management by conflict

Most prominent reasons for the conflicts are: Differences in gender, age, education, salary, or world-view. The vagueness of the tasks assigned, the lack of adequate information, the different ways of interpreting orders and injustice of managers. 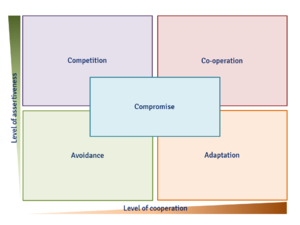 Conflict management involves first identifying the conflict and then choosing the right strategy of resolving it. We can distinguish five such strategies:

Management by conflict is difficult to apply in practice. This style stimulates the organization, and, therefore, uses the creative potential of its members. In addition, it provides the ability to identify a man who consciously inhibits the growth of the company by pursuing his private goals. Management by conflicts can, however, contribute to a decline in results of the company, as well as weakening of commitment of employees. There is also substantial danger of self-destruction that even a small conflict can bring.

Process organization in is usually portrayed in a positive light in literature, it is presented as a model to the operation of businesses adapted to the rapidly changing environment. Authors points also out to the potential conflicts that may occur in the process organizations.

According to M. Hammer, the conflicts are characteristic to this organizational layout. Similarly G. Rummler and A. Brache, are pointing out that conflicts can arise between processes. In addition, developing teams pursuing the process may involve the employment of additional staff. Moreover, they add, that the organization functioning on the basis of a process structure can create barriers to the sharing of knowledge and resources.

Referring to the practice of the functioning of the process organization it could be noted that a common source of conflict is the lack of consequence during development and implementation of its objectives.

Another cause of conflicts is more liquid internal structure with the result that boundaries between processes could be brushed aside and then conflicts arise on the connections between one process team and another.

To eliminate the conflicts described above, or to limit their effect, it is proposed to: