Genichi Taguchi (Jan 1, 1924 - June 2, 2012) was an Japanese engineer and statistican, who applied statistical methods to manufacturing of goods.

Takamachi, city where Taguchi was born, was famous for the kimono industry. His family expected him to study textile engineering, but due to World War II he had to stop studying. After war he changed interests and started to study statistics.

He worked for Japanese Ministry of Public Health and Welfare, where he started to work on design of experiments idea. As Kaoru Ishikawa, he was under the influence of William Edwards Deming. He gained experience while working for Electrical Communications Laboratory for 12 years. After this, he began to consult in Japanese industry. At that time, he also worked as a visiting professor in Japanese and American institutes. In 50-ties he worked in Indian Statistics Institute with Walter A. Shewhart.

Taguchi's ideas are widely used today in many industries. Due to level of sophistication, they are often less known than achievements of Deming, Juran or Ishikawa.

Genichi Taguchi was author of several methods, including: 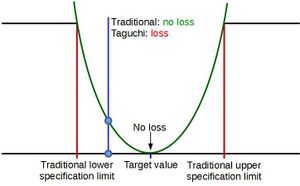 Design of experiments is the method of designing tasks in a way that allows find explanations of variation. Origins of systematic trials can be found in 18th century. Considerable improvement was possible thanks to statistical methods developed by Ronald Fisher and used by Genichi Taguchi. Experiments allow reduce number of errors and defects not only on production line, but also other areas, e.g. in medicine.

The largest share in global losses of quality are these manifesting themselves in the longer term, related to consumer dissatisfaction, loss of market, increased stocks, performance drop, etc. In order to estimate them the quality loss function is used. The way the loss function is defined depends on the type of quality characteristics.

In order to achieve robust production process, it is necessary to collect data about quality and analyse it. The data can contain two types of information: signal and noise. The former is related to process operations and can be controlled, while the latter is random. The aim of off-line quality control is to reduce impact of noise on the product to the minimum.