Six sigma (\(6 \sigma\)) is a method of production system improvement performed in order to achieve a product of perfect quality. The method base on statistical process control and other statistical tools to find causes of problems. The team of employees works on causes to remove it. The method was developed by Motorola in USA in 80s and popularized after the company achieved Malcolm Baldridge National Quality Award.

The name of the method refers to statistical tools. The 6 sigma is the level on which only 3,4 defects occurs per 1 million of operations (not products! each product requires many operations). That means 99.9997% error free operations.

The statistics behind six sigma is really simple (see below). The heart of the program is organizational change. It is relatively easy to improve quality to 2-3 sigma buying new equipment. But each next level becomes harder to achieve. In literature the level of 4.7 sigma is known as critical. Moving beyond this requires usually rethinking of all the process. Organizations don't have to reach 6 sigma with each operation. They usually go so far with the most important ones.

Some authors propose modified names of the cycle.

Black belts and green belts are managers or employees that have certain roles in the program. The main roles are:

The system of roles shows that program is being implemented with extensive participation of higher management. This is the opposite approach to Japanese ideas like Total Quality Management or Lean management. It's one of the weaknesses of Six sigma. 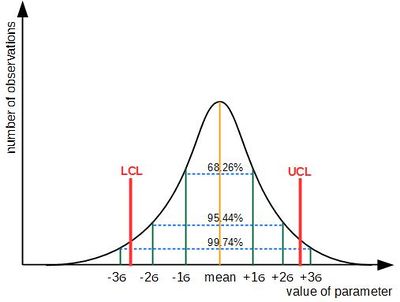 To understand what's behind Six sigma we need several terms:

Variability of parameters is typical for every process. After many repeats of the process, we can collect enough data to draw a histogram showing what values monitored parameters have. Let's assume, you cut slices of bread. Each will have a bit different thickness. If you measure the thickness and draw a histogram you'll probably end with a bell curve. The most of slices will have thickness about the mean, and the further from the mean the smaller the number of slices.

It's a measure of variability. You can compute it analysing difference between mean thickness and thickness of each slice of bread. The standard deviation is interesting, because:

The control chart was invented by Walter A. Shewhart. It shows the variability of the process on simple chart. It defines two limits: lower control line and upper control line. It the parameters of the product are within those lines - the product is good, otherwise it's a defect. 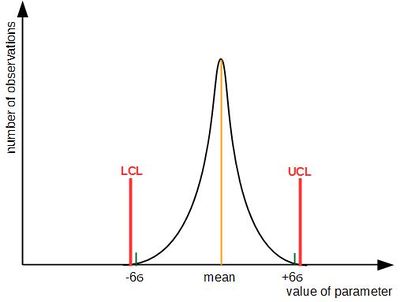 The same process after 6 sigma improvement. The standard deviation is so low, that 6 sigma fits between mean and the control line (not to scale)

We want all the products to be within control lines. The idea of Six sigma is to make the process very stable. This allows to reduce the standard deviation. It should be so small, that 6 standard deviations from the mean should fit between mean and each control line. In that case our we'll achieve 99.9997% correct operations.

Modern research results show that 6 sigma programs only in much less than 50% of companies end with profits. The success of Motorola was not repeated by over half of enterprises that tried to do it.